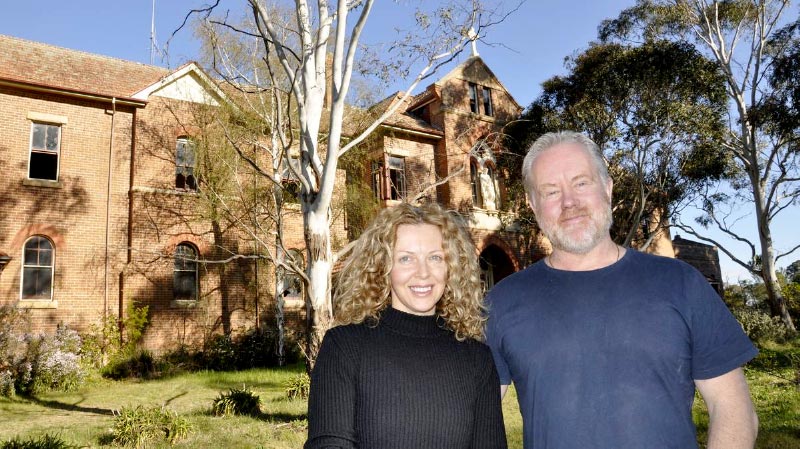 But there are also plans to partner with local churches and agencies, delivering social programs, including a youth group and plugging other ‘gaps.’ The couple, who moved from Moss Vale, said they had been “dreaming” about the idea for 15 years but their 17-year-old daughter Isla’s illness channelled their energy.

“She was a bit of a social activist and stood up for things,” Mr Patterson said.

“She wanted us to do this so when we found the building, I gave her a high-five and promised we’d do it. We have nothing to lose.”

Isla passed away from the effects of cardiomyopathy earlier last year.

The former orphanage, built in 1905 to an EC Manfred design, presented the perfect opportunity for their idea.

Local agent Peter Mylonas steered them in its direction and the couple exchanged contracts in May.

Accommodation would be subject to a development application.

“With such a rich history we feel we can use it to sow beauty back into the community from something that’s been left to rack and ruin,” Mrs Patterson said.

“At the end of the day we want it to be an incarnational expression of Christianity and to do that, you have to live it.”

This was the main aim of an ‘intentional community.’ Mrs Patterson said grief could impact in many ways on a person but she wanted to use it positively to help the community.

The former palliative care nurse highlighted the work of Goulburn girl, Caitlin Lance, who facilitates the rehabilitation of trafficked women and children in Calcutta. The monastery will not only help this work but make people aware of modern day slavery and its use in manufacture of consumer products.

The Pattersons see their concept as continuing a legacy of care in the building. The organisation will be called ‘Liminus,’ the Latin word for threshold.

“(After losing our daughter) we are acutely aware that we live on the threshold of eternity,” Mrs Patterson said.

“As such, we seek to live lives of faith, compassion, justice and simplicity.”

Over the past four months they’ve been cleaning up the old orphanage, damaged from years of vandalism. Mr Patterson is also repairing the numerous smashed windows.

There’s a way to go yet but with the structure still sturdy after more than 100 years the couple see its potential.

A restaurant/cafe and bakery using Fair Trade products are also part of the plan. The Pattersons have owned and operated the Milton Heritage bakery for 11 years, income from which they partly
used for charitable purposes.

“We don’t plan to bulldoze anything,” Mr Patterson said of the heritage listed building.

“It’s perfect for what we want to do. It has a great sense of symmetry, space and good design. The more you look at it, the more (features) you find.”

They’re also keen to tell the stories in some form of children who lived at the orphanage.

The couple hope to start operations by mid next year.